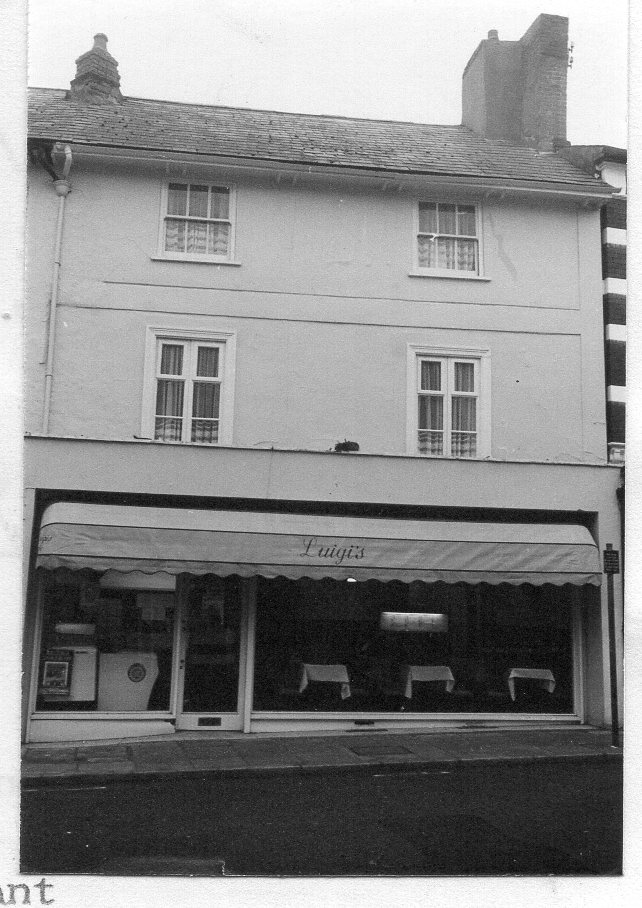 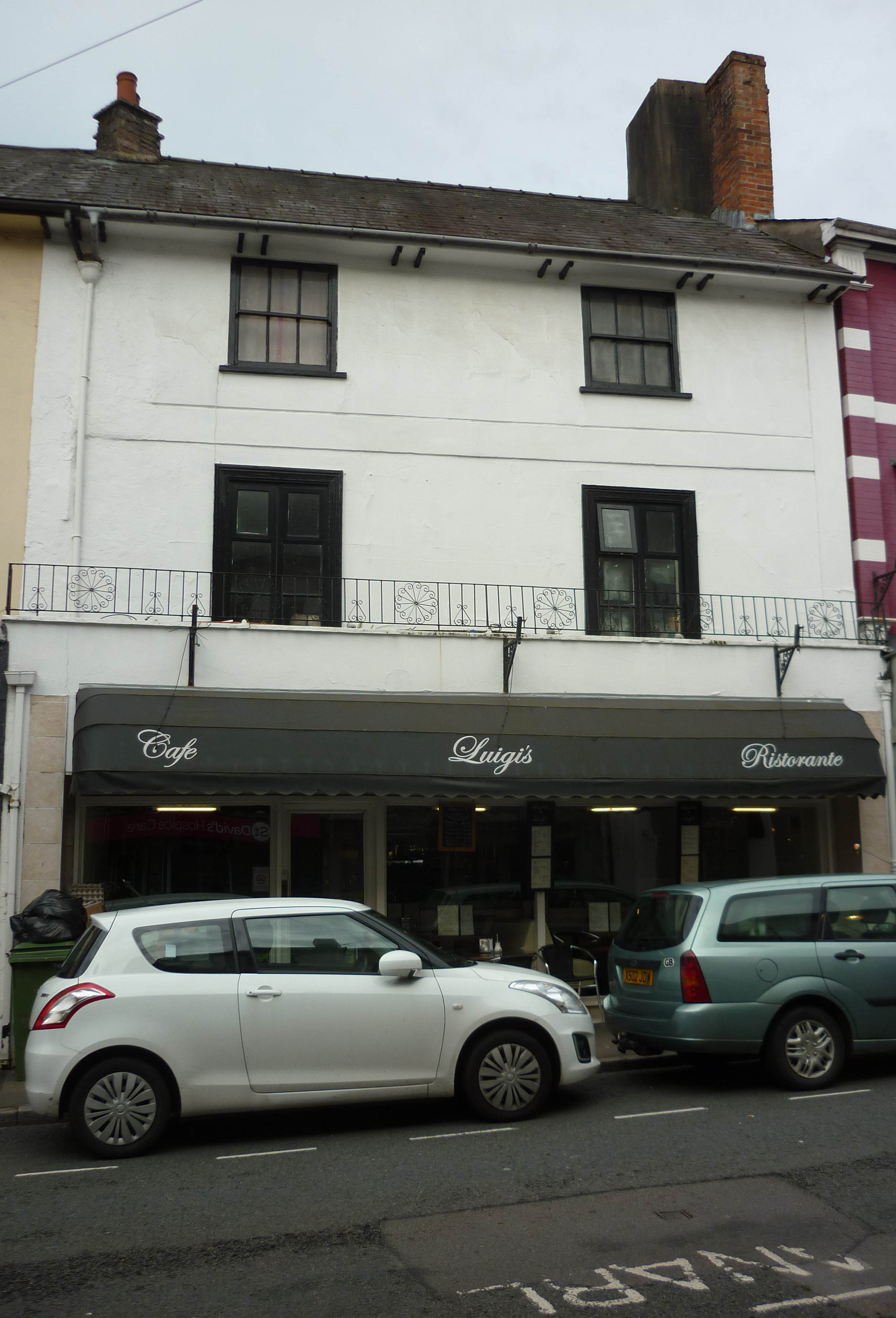 Casements to first floor formerly opened onto a balcony at no. 12

“All the messuage where James Gunter lives in Cross Street ward, Abergavenny, with all buildings and cellars

1773 : Bequeathed to his wife, Elizabeth

1780 : Mortgaged by their son, William Gunter to James Gabriel, cabinet maker, who had married Elizabeth Gunter, sister of William and who lived at no. 11

1826 : William Gunter Lewis, son of the above, mortgaged the property to William Williams (miller) of 56 Cross Street

Alfred Jackson (source Local History Survey 1980) says that when he was there, an old kitchen with a cooking range was half below ground level and a spiral stone staircase, leading from it to a point 4 feet above the floor above, was found behind a partition.

Since 1973 owned and run by Mr L Basini, trading as Luigi’s Restaurant

From information supplied by the late Alfred Jackson for Local History Survey 1980:

Elizabeth Gunter Lewis was the widow of William Gunter Lewis (d.1834).  He was descended from James Gunter, who founded the wine merchants trading at this address in the mid 18th century.   His father, Richard Gunter (gentleman) in his will dated 1700, names his kinsman James Gunter of the Priory (gentleman) as one of his Trustees and directs that his son, James, on reaching the ave of 16, should be apprenticed to a wine coop(sic). He later became a wine merchant at this address.

Two of his grandsons (first cousins), both named James Gunter, were apprenticed to the confectionery business of their aunt, Mrs Negri, who married a foreigner engaged in that business in London and founded the well-known establishment in Berkeley Square called “Gunters”.

A Quote from Touring London by W Teignmouth Shore, published in 1930, states “At No.5 Berkeley Square is Gunter’s, long famous for its ices and wedding cakes.  I recall the long string of carriages lined up here on summer days, wherein lolled smart ladies while superb footmen ministered to their icy desires”   (source : the late C H Feldwick, September 1981)

Extract from article “Mansions in Place of Cabbages” The Boltons, South Kensington, from “Country Life” 10 November 1983 (quoted in Local History Survey of 1980)

Gunters – Georgian confectioners with shop in Berkeley Square.  George III praised his host while staying in High Wycombe on being provided with “hot rolls brought from Gunter”, exclaimed “Ah  Gunter, Gunter, I am glad you deal with Gunter.  Nobody like Gunter!”

James Gunter – Landowner – invested profits in early 19th century in a series of small market gardens at Brompton, until he had almost 100 acres, with the deliberate intention of profiting from the inevitable building development

Robert Snr lived at Earls Court Lodge, Old Brompton Road – his home was nicknamed “Currant Jelly Hall”, an allusion to the source of their riches.  In 1831, he bought Wetherby Grange, Yorkshire, for his eldest son, thereby entering the landed gentry class.   In 1901, Robert II was created a baronet.

Sir Robert Benyon Gunter, 2nd Bt, sold some of his London estate in 1917 but part still remains in family hands.

The earliest record I have been able to find is approximately in the middle of the 18th century.  A certain Richard Gunter (gentleman) in his will dated 10 March 1700 names as one of his Trustees his kinsman James Gunter of The Priory and directed that his son James, when he reached the age of 16, should be apprenticed to a wine coop (sic).  This said James Gunter later became a wine merchant at the shop in Cross Street now known as no.10 and, allowing time for his training, this must have been some time between 1730 and 1750.   The business stayed in the family land eventually descended to William Gunter Lewis, who died in 1834 leaving it to his wife Elizabeth Gunter Lewis who is recorded as running the business until 1862.   In that year, or at least some time before 1875, the business was sold to Charles Tucker & Co, who also traded as Tea Importers and Family Tea Merchants.   By this time also, ale and porter were sold, as well as wines and spirits.   By 1891, they were known as Charles Tucker & Son, but the son apparently was not keen on following in his father’s footsteps because, by 1899, the premises had become a Public House called the Borough Arms, Landlord Timothy Green Jones.

In 1906, the landlord was David E Humphries, but in 1907 the Public House was closed down and Messrs Jackson & Bevan had opened an Ironmongers shop.  The name is later quoted as Bevan & Jackson up to about 1931 when Bevan departed and Alfred Jackson was the sole owner.  Some time later (1934), he transferred the business to nos. 1 & 2 Cross Street.

In 1956 : advert for SHACS Ltd (acronym for ?? South Herefordshire Agricultural ……..  ????) “The Farmers’ Own Society” Promising petrol during delivery rationing

In 1968 : advert for Romney Marney, photographers (?assume upstsairs)   Also at no.9 Cross Street