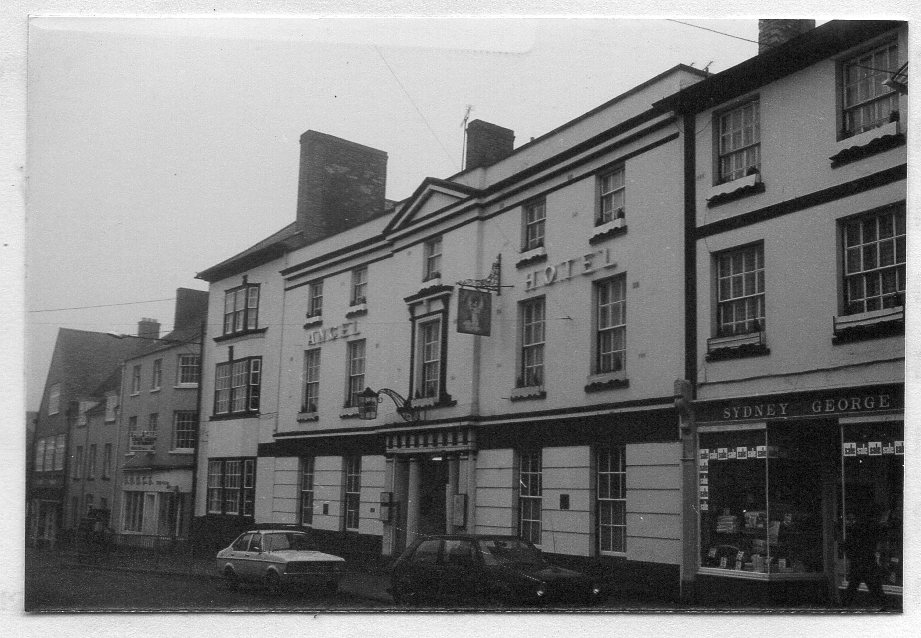 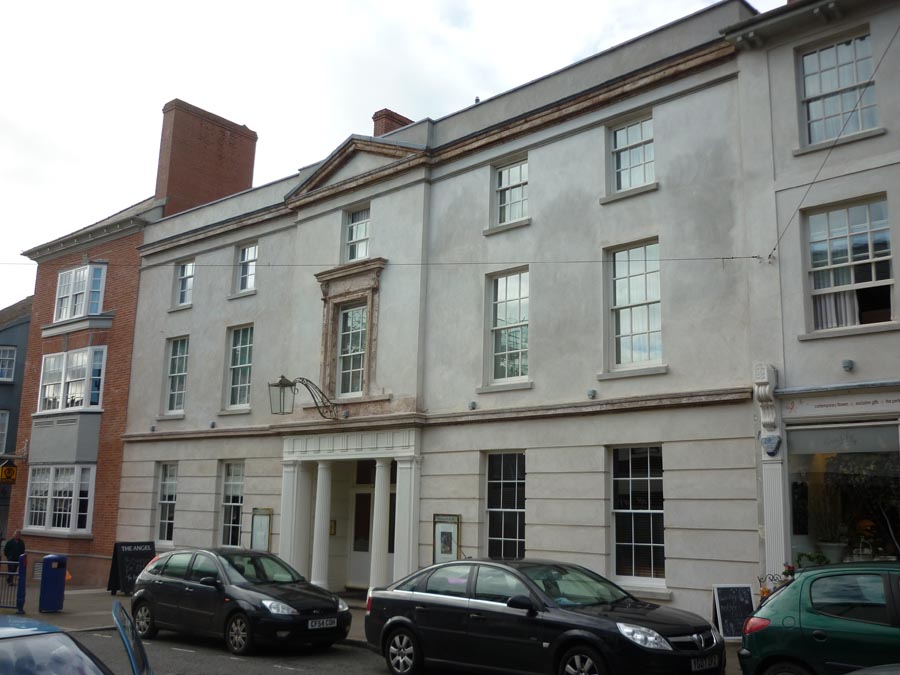 The present building mainly George III but the site is much older.  Extensive internal reconstructions 1980-81   (and again in first years of 21C)

The Angel Hotel was taken over by the Griffiths family in June 2002 (source : article/ad in Abergavenny Chronicle)

For additional images and information for the Angel Hotel please click * here *.

The earliest documentary reference found is in Bradney, who says that in 1736 the Angel belonged to a William Dunwoody who in that year died and left it to his son, Robert Dunwoody.  The subsequent owners seem to have been Samuel Sanders and Charles Hanbury Saunders (the spelling of the surname varies).

The Proprietor in 1829 was a Mr Lewis.   The hotel was a Posting Inn and Mail Coach Office for London, Milford Haven, Newport, Bristol and Merthyr.   Passengers also took coaches for Birmingham, Shrewsbury and  Aberystwyth.

In 1839, the proprietor was Charles Barratt and the freehold was owned by the Duke of Beaufort

There are records of various functions taking place, for example in 1825 a Ladies’ Bible Society meeting and in 1839 a meeting of the Brecon and Abergavenny Canal Society.  Also in 1839, there was a Grand Dinner to celebrate the passing of the Reform Bill and in 1838 a Fancy Dres Ball was held (“dancing until 5am”) to mark the beginning of the Eisteddfod.   Among the people attending functions at this time were Sir Benjamin Hall (of Big Ben fame), Crawshaw Bailey, Lord Clifford and Mr  Rolls (later Lord Llangattock and father of the founder of the Rolls Royce Company.

In 1891, an advertisement announced that the Perseverance Coach ran regularly between Pandy and Raglan, calling at the Angel Hotel.

The proprietor in 1908 was John Pritchard, who seems to have been there since 1885.  It was described in 1901 as a “Family and Commercial Hotel and Posting House” and advertised “drives to places of interest”.

Subsequent references describe it only as a hotel, the proprietor in 1920 being James Thomas and in 1910 it was Hubert Beynon Stocken.

The first reference to it being owned by Trust Houses  Ltd is in 1937. Although the site is much older, the present building is mainly George III.  continual changes have been made ove rthe years and extensive internal renovations were made in 1980/81.    (Local List : Grade II)

“Location  Situated prominently on the corner with Lower Castle Street and the main commercial street which runs from south-east to north-west across Abergavenny.

History The hotel was built mostly in the early C19 but incorporates an earlier, probably late C18 wing at the left-hand (south-east) end.  Bradney reported that The Angel funct9oned before 1736 when William Dunwoody passed it to his son, but none of the present building appears to date from then.  The whole frontage remains nearly l unaltered in appearance, as shown by the many available prints and photographs from teh C19.  An early print, for instance, shows a plain 6 over 6 pane sash as the top left hand window, with everything else the same as now, while early photographs show the present window.  At that time, the central entrance was a carriageway through to the inn-yard, this is shown on the map of 1834 but early C20 photographs show the frontage with a continuous pavement.  The hotel was given a major repair and an internal rearrangement in 1980-1 and the central frontispiece with the door surround is a recent reproduction.

Interior   The interior of the hotel had a major re-structuring in 1980/1 and none of the main rooms are recognisable as dating from before then, but some archways and dado panelling may be older.  The main staircase appears to be early C19. This is an open-well top-lit stair with scrolled tread ends, two stick balusters to each tread and a continuous handrail.  The main bedroom floor was seen only in part but all appeared modern.

Exterior  Stucco fronted and painted with a natural slate roof.  Neo-classical style with horizontal grooving to the ground floor and smooth render above to the first and attic floors.  Three storeys, and six window bays 1+5 the end left one being wider.

The main five bay part of the elevation is a balanced design, 2+1+2 with central entrance set slightly forward in a pedimented feature .  Porch with Doric columns in antis, panelled side pilasters and triglyph frieze;  there is a good wrought iron lamp bracket over the porch.   All ground and first floor windows ar e6 over 6 pane sashes, the centre one on the first floor with a bold architrave on console brackets, all the rest are plain.   Three over 6 pane sashes on the top floor.  Heavy cornice and tall parapet, roof hidden but red brick stack to left of entrance bay and on both gables.

The end bay to the left has an older character.  It has a wide splayed two storey bay with paired 8 over 8 pane sashes with 2 over 2 pane sidelights.  The second floor has a smaller bay with paired 6 over 6 pane sashes.   Roof hipped to front with red brick stack to right.

Four window return along Lower Castle Street, three doors and a window on the ground floor.  Windows are 8 over 8 pane sashes with 6 over 6 on the top floor.   Roof with five tabled dormers and two tall stacks.  Additional two storey gabled bay beyond.  Two windows, blind on the ground floor, 4 over 4 panes above.  The elevations to the inn-yard are more varied and altered.

Reason for Listing   Included for its special interest as a well-preserved early C19 and earlier building retaining good classical character and as a long-established and historic coaching inn.

“The Angel Hotel was mostly built in the early C19 but incorporates an earlier, probably late C18 wing at the left-hand(south-east) end.  Bradney reported that The Angel functioned from before 1736 when William Dunwoody passed it to his son, but none of the present building appears to date from then.  The whole frontage remains nearly unaltered in appearance, as shown by the many available prints and photographs from the C19.”

“It is a three storey stucco fronted and painted building with a natural slate roof.  It is built in the neo-classical style with horizontal grooving to the ground floor and smooth render above to the first and attic floors.  It has six window bays and the main five bay part of the elevation forms a balanced design, 2+1+2 with a central entrance set slightly forward in a pedimented feature.  The porch has Doric columns in antis and panelled sides.  There is also a heavy cornice and tall parapet and a red brick stack to the left of the entrance bay and on both gables.  The end bay to the let has an older character and has a wide splayed two storey bay with a smaller bay on the second floor.”

“The interior of the hotel had a major re-structuring in 1980/1 and none of the main rooms are recognisable as dating from before then, but some archways and dado panelling may be older.”