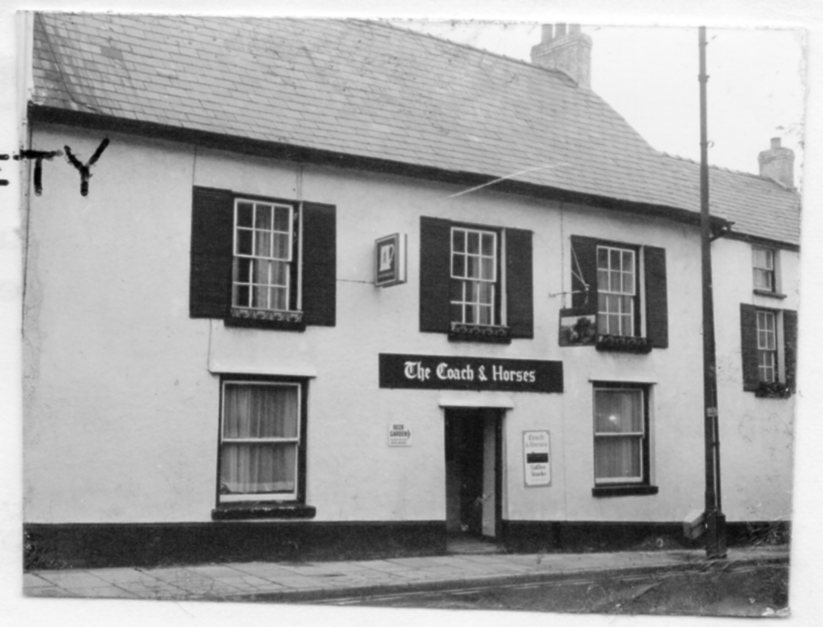 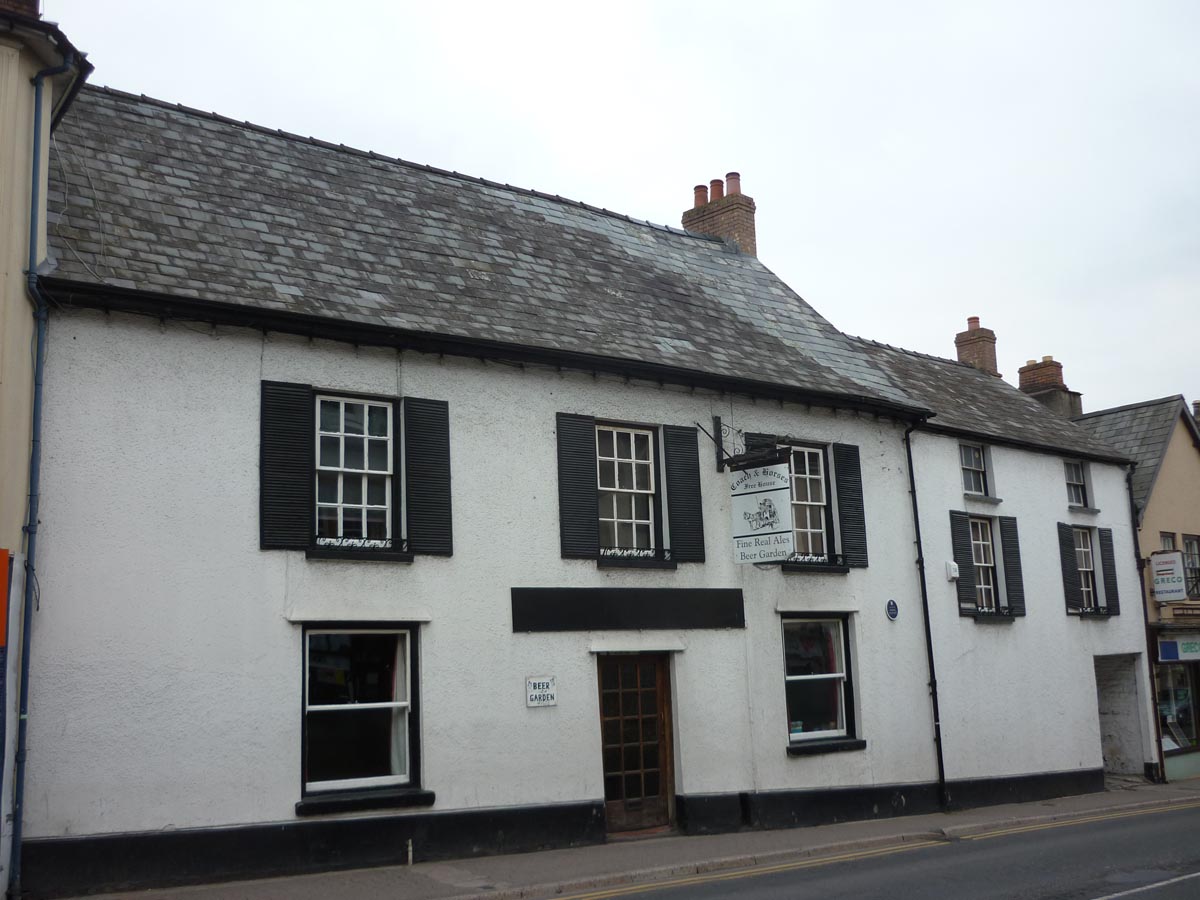 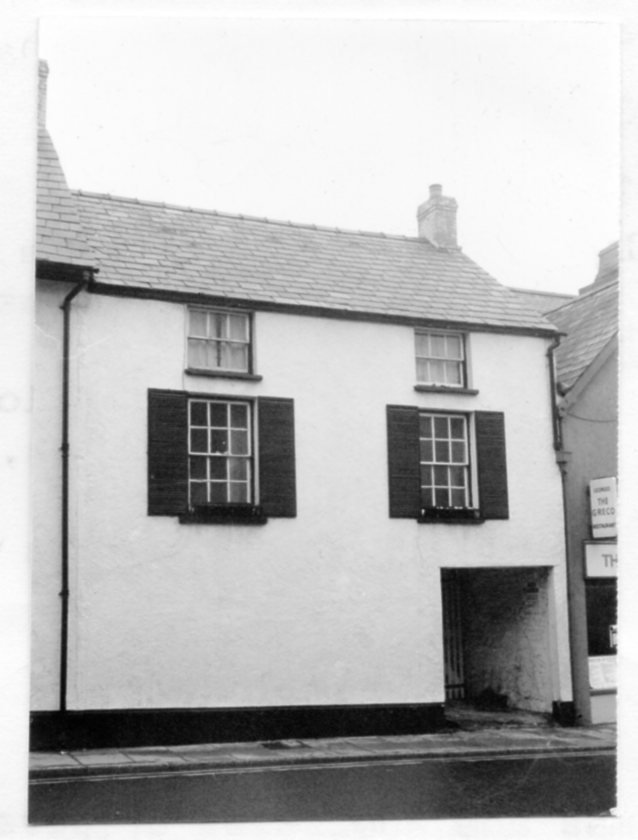 three windows, upper glazing bars intact.  To the right -three stories in height but ground floor is blank except for carriage door on the right.

After 1794, the landlord was paid £7.6.0d for loss of part of his premises when the Mill Street  (East) gateway of the Medieval town wall was taken down and the street widened

To the right of the fireplace is the remains of a spiral staircase, now blocked up, and a small pantry now fills the left-hand inglenook. 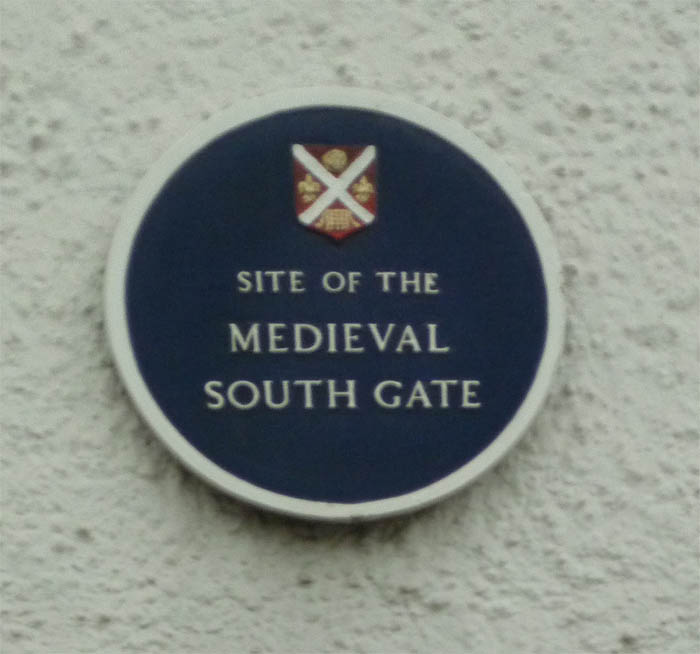 The Cymreigyddion Society (Society of Welshmen) formed in 1832 by local tradesmen but strongly supported by Lady Llanover and the leading families throughout Wales and the borderland, met here.   (Alfred Jackson)

Cymdeithas Cymreigyddion y Fenni was founded on 22 November 1833. The Gorsedd Circle at the Hardwick roundabout was erected in 1913 to mark the visit of the National Eisteddford to the town   (F.O. 18/12/92)

The original Coach & Horses was situated at no.11 Castle Street

“Situated on the main commercial street which runs from south-east to north-west across Abergavenny.

History : Probably mid C18 with alterations in the early C20.  The main bar fireplace is said to have been brought from no.65 Castle Street, demolished for slum clearance in the 1960s.  The house was known as The Sun Inn until 1974.  The South Gate of Abergavenny spanned the street outside this building, it was demolished in 1795, previously the street to the south of the gate was Mill Street.   The Cwmreigiffion (sic) Society was founded here in 1832

Interior : The ground floor, once two rooms with central hall, is now a single bar space with stair rising at rear right.   There are five large and long cross beams, but they are only roughly chamfered and have no stops.  The north wall carries a huge late C16 fireplace with an enormous lintel stone and hollow chamfered jambs (see History) . Upper floors not seen.

Exterior : The whole building is uniformly roughcast and has a natural slate roof. Two linked sections, the right hand one probably later;   both are double depth plan, but their fronts are not in the same plane.  To the left the main part is two storeys, three windows.  Lower windows are unevenly levelled and sized early C20 plate glass sashes and with a modern central door without architrave.  Upper floor windows with 6 over 6 pane sashes and external shutters.  Steeply pitched plain roof with red brick gable stacks.   To the right, a wing of three storey height, but with the ground floor blind except for carriage arch on right.   First floor has two windows with 6 over 6 pane sashes and external shutters.   The second floor has two small 3 over 3 pane sash windows.   The ridge line is lower than the adjoining part and thus has a lower pitch as the eaves line is the same, small stack on right gable.    The rear elevation shows a red sandstone rubble back wall and a small central 2-light dormer.

Reason for Listing : Included for its special interest as a probably C18 public house retaining its character which has strong group value with the other historic buildings in Cross Street.

If you have any further information about this property please email alhs@live.co.uk
in Cross Street  by ALHS/5 20 Feb 201627 Sep 2016 0 comments
Share