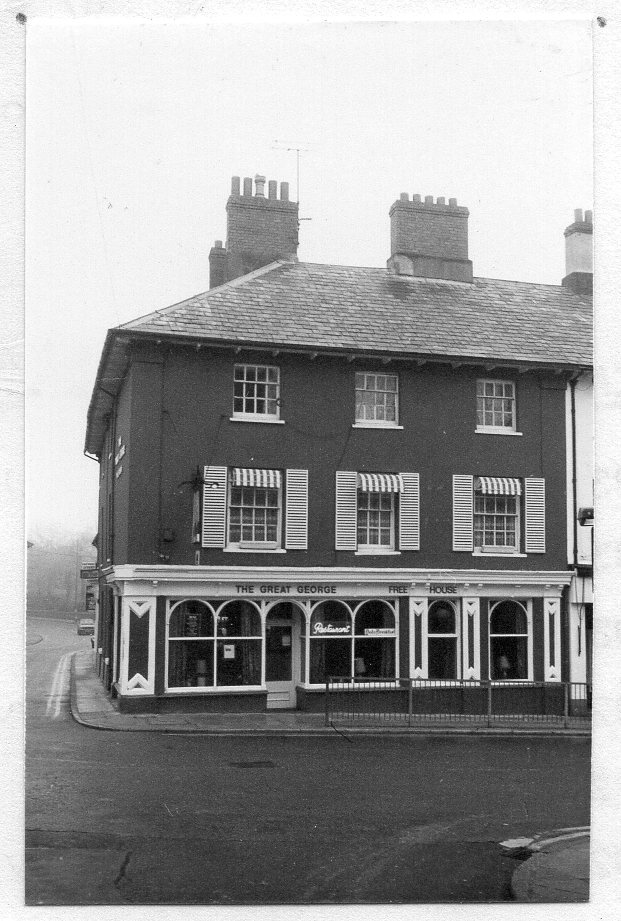 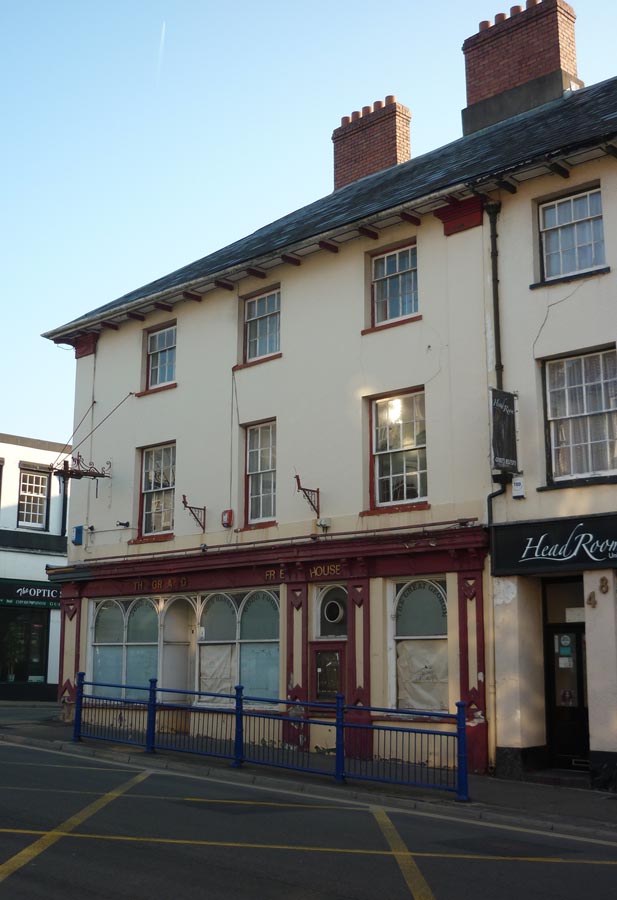 Cellar with large arch from which a passage leads under nos. 47 and 48 Cross Street, part of the same building.  The tiles in the fireplace in Mrs Berrington’s shop, previously part of the Great George, are made by W Godwin, Lugwardine, Hereford.  The factory closed in 1800 (source : Mrs Bristow)

The interior is much older than the frontage which, with that of nos. 47 and 48, was rebuilt in the latter part of the 18th century, about 8ft in front of the previous half-timbered building (this can be seen from the roof structures).

The Hotel extended into Monk Street up to and including no. 5a Monk Street 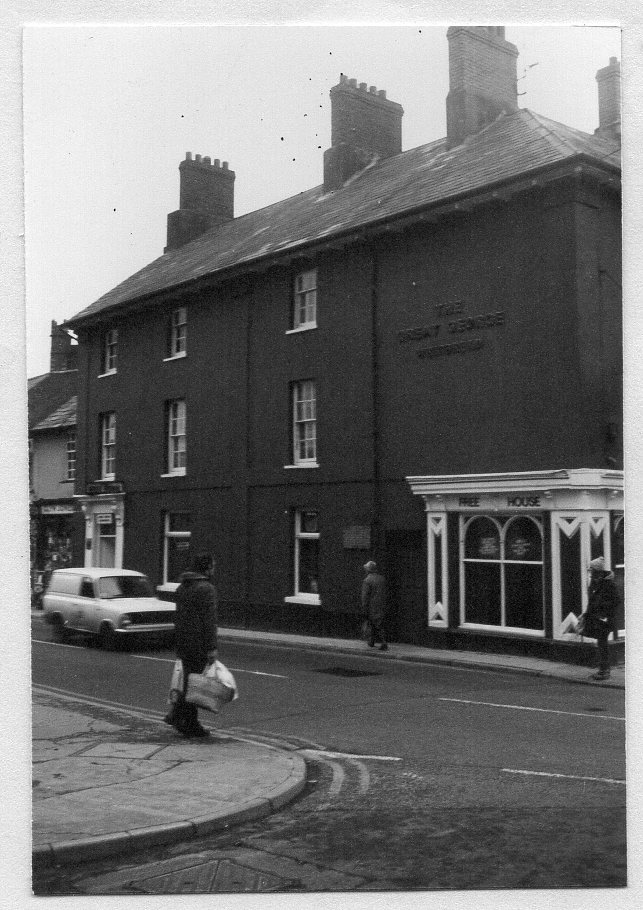 The cellars of these shops belonged to the inn  (source : Gwyn Jones)

The Great George has been empty and closed for many years (?date).  Report from a local shop owner in 2015 stated that “water was pouring in through the roof”.  Work had been due to start in 2014;   scaffolding went up in November 2015 and refurbishing work is ongoing

At time of original survey, the Great George was owned by Whitbread and run by Jan Bristow

Source :  Abergavenny  Pubs  Frank Olding The Bellamy family acquired the business in 1775 and the family ran the business for the next 100 years

Proprietor in 1906 : Alfred Jenkins – also wholesaler at no.3 Monk Street

W E Bellamy, who had the wine vault here, resided in the newly-converted castle, a picturesque and secluded retreat (1858 Directory).   John Bellamy was a juror in the John Frost trial.  The name Hannah Bellamy appears on documents of 51 Cross Street, from 1796.

“The business is the oldest of its kind in the district, operations having been originally commenced in 1775 by Mr Bellamy in whose family it continued until 1875 when it was taken over by Mr Charles Tucker.   In 1893, the retail business was run from Cross Street and the wholesale business from Monk Street.   They held bonded stock at their stores under the market.  They employed 10-15 men”  (source Ports of the Bristol Channel, 1893)

The “Great George” is the badge of the Order of the Garter, conferred on the Duke of Wellington in 1813.   Enamelled and set with diamonds, it formerly belonged to the Great Duke of Marlborough and was subsequently presented to the Duke of Wellington by King George IV, and worn by Winston Churchill at the Coronation of Queen Elizabeth II

“History : This is an architecturally remarkable building which, for its grandeur of scale, is unlike anything else in Abergavenny. It is extremely difficult to date because it has design characteristics from either the later C17 or early C19, but appears to have been built as a unit and so is much likelier to be nearer the latter date than the former.  The use of the giant order in the manner of Inigo Jones is unusual but a part of the remarkable effect created is because the ground falls on both elevations, with the Monk Street one in particular resulting in a giant doorway at the far end of the elevation.  None of the joinery is earlier than c1820, so perhaps c1825 is the best estimate for teh whole.  The maps of 1760 and 1801 both show the site as built on.  Coxe in 1801 shows a large building as now, but apparnetly with a central courtyard suggesting that it has been replaced.  Further evidence supporting c1825 is suggested by the clear heightening of the chimney stack of the adjoining but much lower No.46 which probably dates from the mid C18.  Since the early C19, there has been little alteration above the ground floor and that has two C20 and one late C19 frontages.  The site of No.49 is recorded as housing a Non-Conformist Chapel in 1688, the first in Abergavenny.   This stayed  until 1751.  It was a public house.   The Wine Vaults in 1775, later Bellamy’s Wine Vaults (1834 map) became The Great George in 1920.   “Great George” is said to refer to the badge of the Order of the Garter conferred on the Duke of Wellington in 1851″ 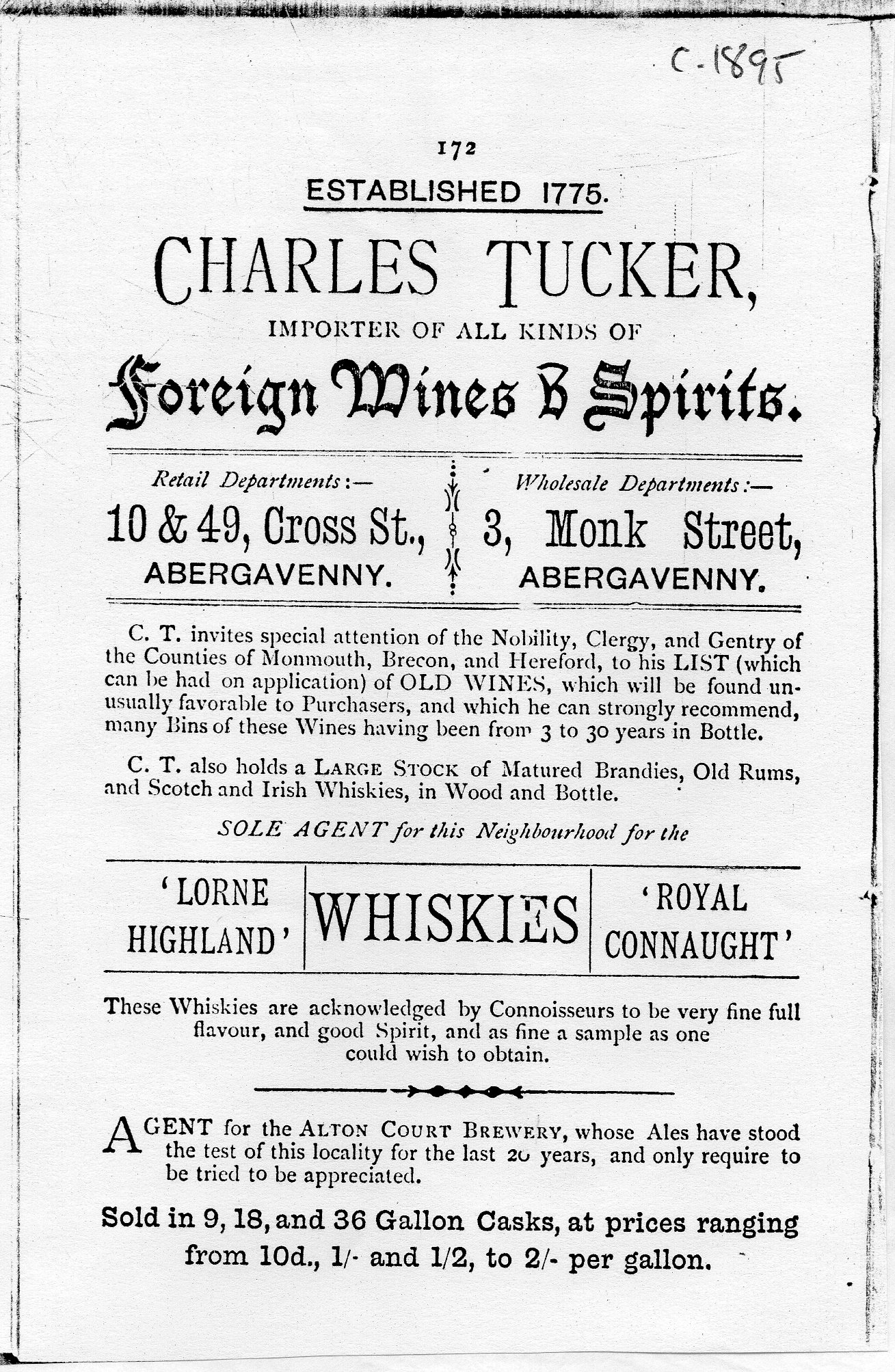 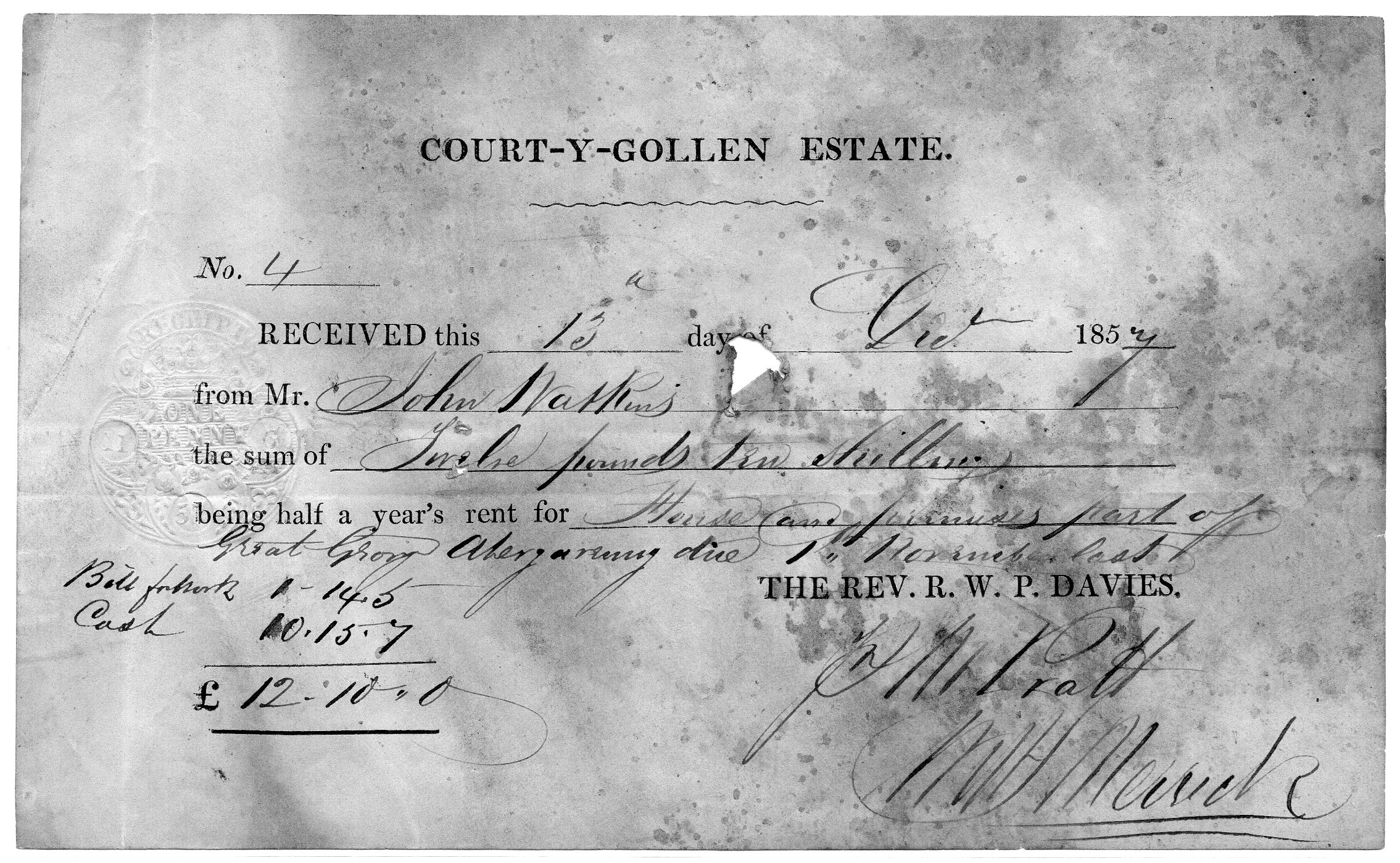 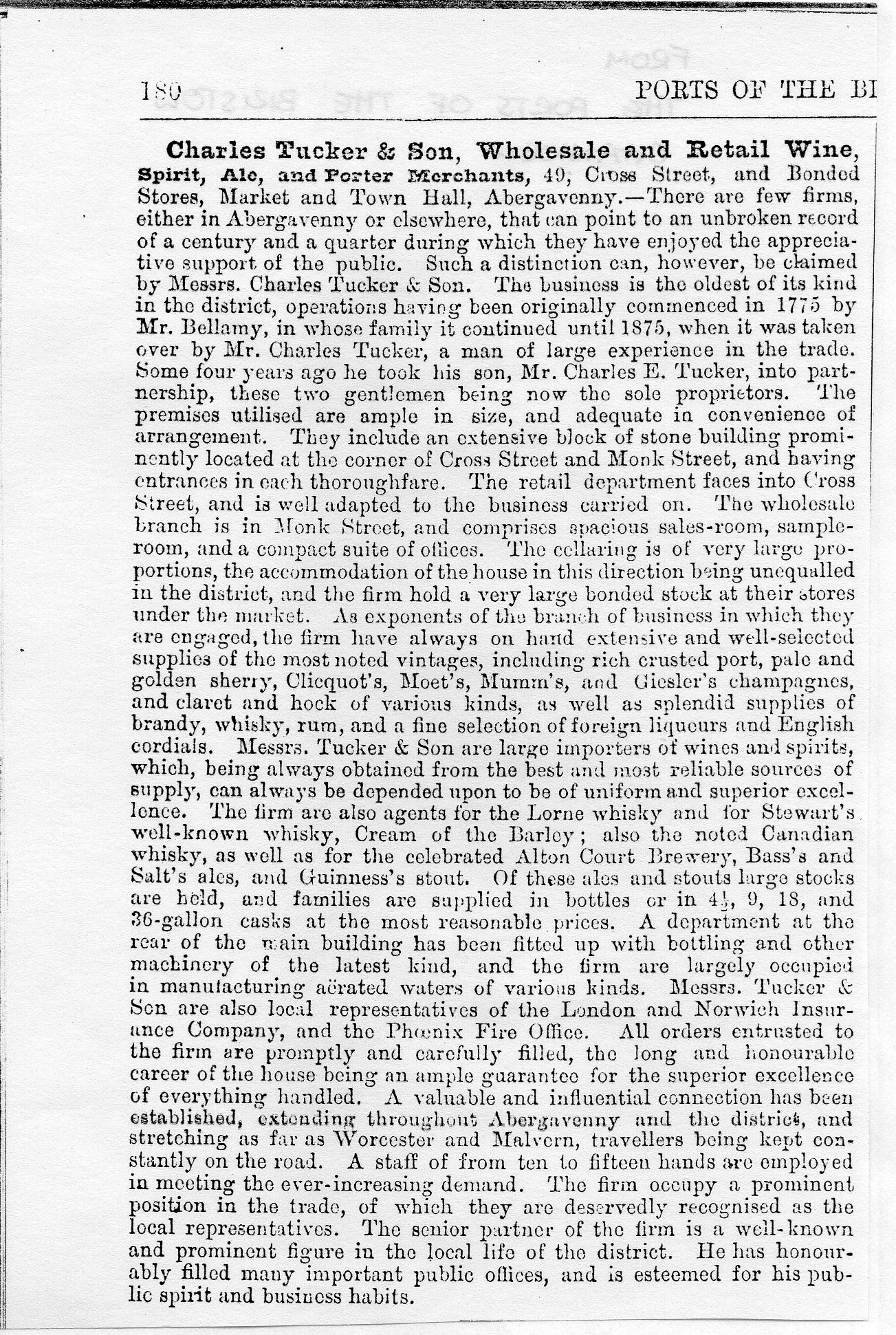