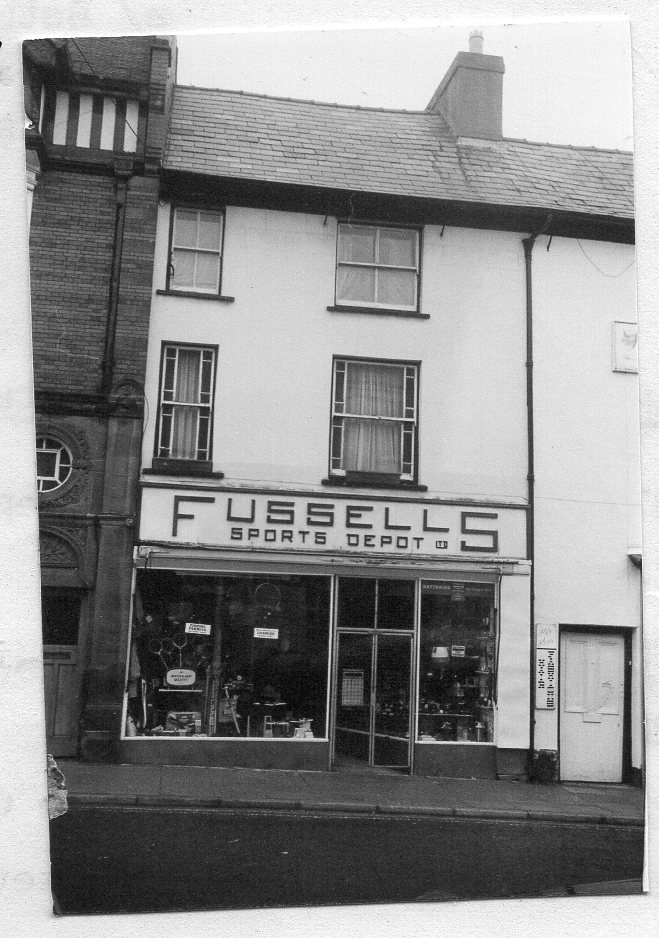 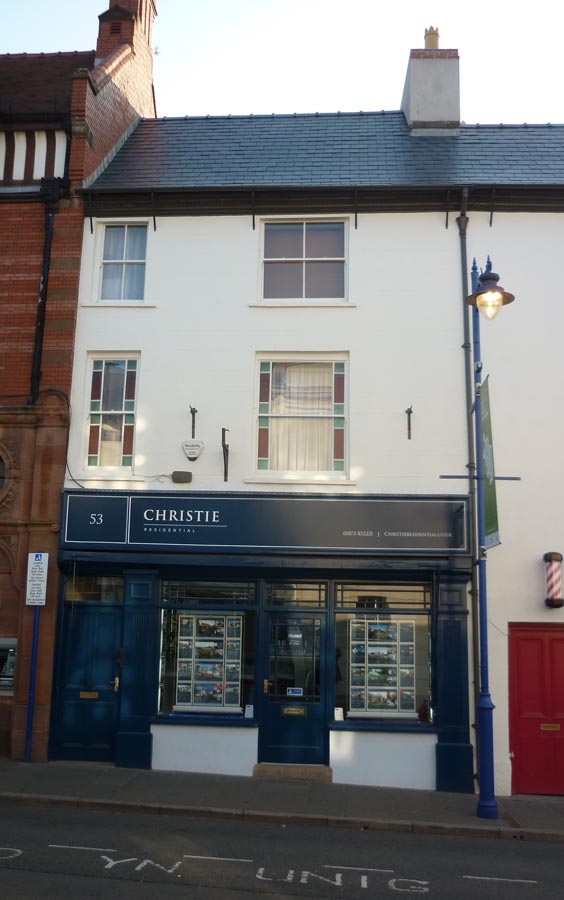 Previously known as Sure Homes Estate Agents, now know as “Christie”. Previous occupier Classic Phones Shop. Late 18th century. Half house demolished 1933 to make room for Lloyds Bank extension.  Photographs in the museum show it in its complete state.  Since 1900, it had been split internally with the Post Office on the south side, and on the north side, the Abergavenny Cycle Company.

This was the first PO in Abergavenny c.1850.

This was the first Post Office in Abergavenny, c.1850

The two Misses Bigglestones worked a hand telepgraph system (semaphore)  Old gravestone behind Tesco has the mason’s names “Biggestone” engraved on it.

The first recorded inhabitant of this house is Mrs Laroche who sub-let it from Richard Williams, who leased it from John Hanbury Williams in 1771.  Richard Williams was living there himself when he bought the property in 1801 (see information on ownership on no.52 Cross Street)

Before 1800, John Rees, Baker, had lived at no. 52 Cross Street but when Richard Williams demolished his old house in order to build this, he moved to no.53.   The bakery was behind no. 52 with access through the passageway between the two houses

The first Post Office in Abergavenny at 53 Cross Street

The first Abergavenny Post Office was opened at the shop of Mrs Price, Ironmonger in Cross Street, Abergavenny, in a portion of the shop now occupied by my brother.  There was a small window with a shutter and postal business was transacted there without shelter or privacy.  It was removed to the premises now occupied by Sadler’s Newsagents, between 1857 and 1861.  This shop was for many years known as the “stamp office” (it is thought that it continued to be used as a parcel office for some time later)

On 27 May 1857, Mr Bigglestone (who occupied no.53) was, on the recommendation of the late Lord Llanover (Sir Benjamin Hall, in whose term of office as Commissioner of Works, Big Ben was built and named after him), appointed Postmaster by the then Postmaster General, the Duke of Argyll.

Mr Biggletsone carried out business as a confectioner and there was no recognised postal counter.  Persons desiring to transact business had to pass along a passage and knock at a shutter in a partition which divided the pasage from the shop.  There was then no appointed staff – the postmaster being assisted by his brother and his wife.  There were then two letter carriers for the town and 6 rural postmen.

On the death of her husband in 1878, Mrs Biggestone was appointed Postmistres and on her detah, Miss E H Bigglestone was appointed in 1884.   At the time of her appointment, there were three town Postmen and six rural;  four clerks and there were three deliveries daily.  In 1911, when I first came to this office to work under Miss Bigglestone, there were 25 postmen, 29 sub offices, 4 deliveries / day in the town area and an indoor staff of 14.

In 1911, when the Post Office took over the National Telephone Company, a CBS Eyeball Indicator-type exchange was installed here. The Post Office was moved to the new building in Frogmore Street in 1915.

1988 : ad for Fleur, shoes and accessories – closing down sale